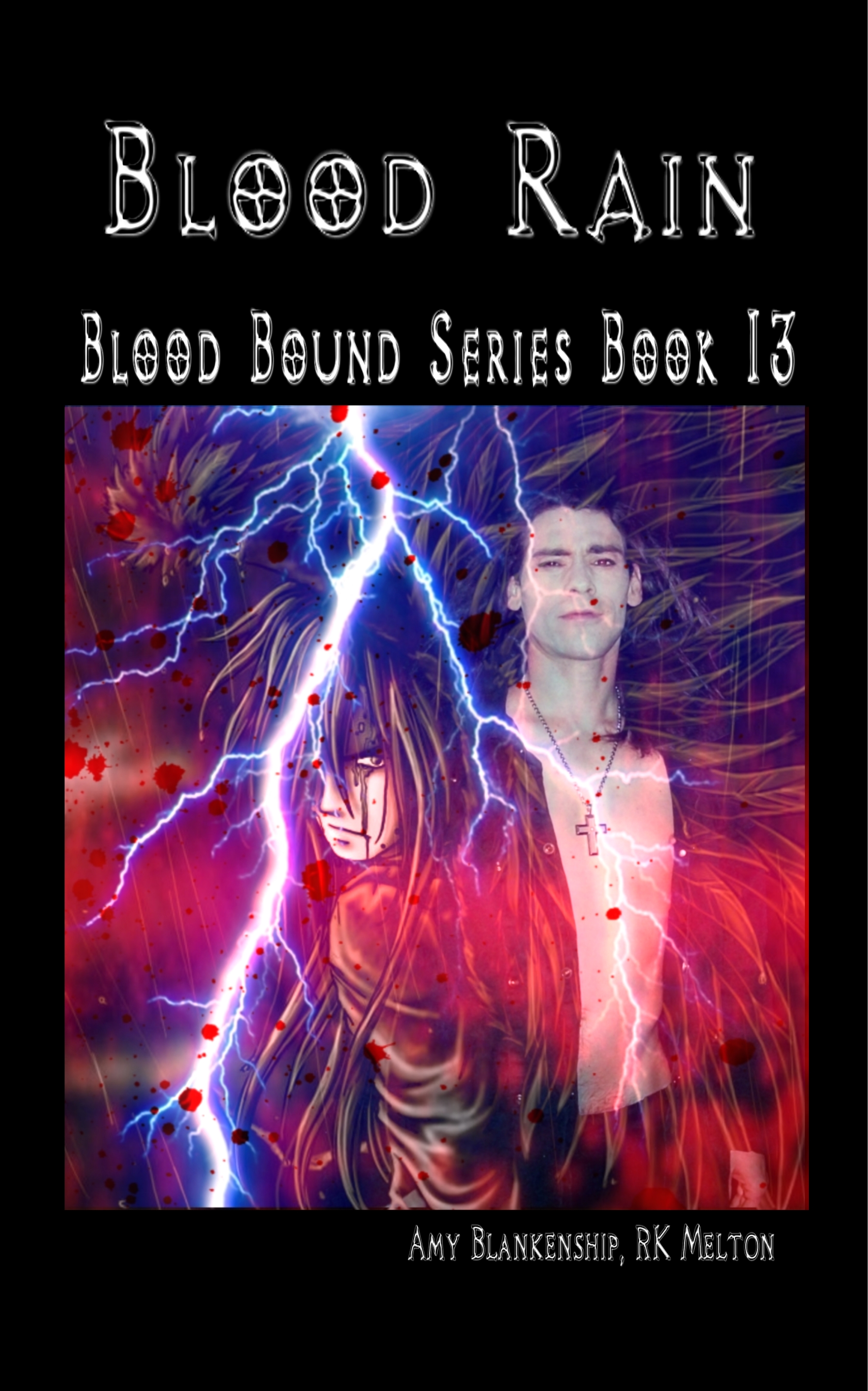 in their own slideshow!

Since 2005, Amy has devoted much time and dedication to bringing her thrilling, adventurous fantasy & paranormal works to life. Her devotion to her craft shows throughout each installment in The Guardian Heart Crystal, Obsession, and Blood Bound Series. The publication of “Addictive Blood” also marks the 16th book release for Amy’s writing partner, R.K. Melton.

I am blessed to have been given the opportunity to work with both Amy and R.K. as their manuscript formatter, website administrator, and audiobook narrator. I want to congratulate them both on this special milestone in their writing careers, and wish them all the best with their future releases.

And of course, we want to send just as much love and gratitude to you, the readers. Because you are the reason the Blood Bound Series is still going strong. Thank you, everyone.

Congratulation, Amy and R.K. We love you!

Thank you so much to everybody who has been reading and supporting Amy Blankenship's and R.K. Melton's "Blood Bound Series." For those of you who are eagerly awaiting the release of:

here is something to tide you over and maybe even a couple spoilers...

When the vampire Kane broke the seal that separates the human world from the demon realm, it enabled our favorite characters from the Guardian Heart Crystal Series to cross over into the mysterious, urban world of Blood Bound. You'll be able to get in touch with Kyou, Toya, Shinbe, Kotaro and Kamui as they live on the third floor of Storm's castle. The problem is... they are not the only ones that crossed over. They know Hyakuhei is out there somewhere posing a real danger to the city that's already having to deal with a demon war. Also, watch for Mrs. Tully's grandson Tasuki to arrest poor Grandpa Hogo for breaking into his own shrine! I'm sure Tama and Kyoko will come to his rescue!

Now, if you're curious about where these guys came from in the first place, they came from the "Guardian Heart Crystal Series," which consists of eight books. So if you're unfamiliar with the Guardians, be sure to read up on their own amazing adventures so you can get to know and love them as much as we do!

These guardians and the humans they are tethered too are special… protected souls that existed on a multidimensional plane… displaced between time and worlds. They existed on every plane of existence simultaneously… a living, physical paradox. Love… they are all tethered to a girl whose soul they have chased through all of time and dimensions. For those that have already read the Guardian Heart Crystal Series, you already know these guys like the back of your hand! Everyone will be joining us, including Amni and Yuuhi.

Now the Guardians have entered a world where paranormal wereshifters live in secrecy amongst the humans, where bloodthirsty vampires stalk the darkened streets at night, and where demi-gods silently look upon this complex circle of love, lust, and jealousy. As with every new world... their story is just begining.

You won't miss a beat with these five brothers as they grow even more and more involved in the exciting, thrilling, and suspensful world of Amy Blankenship's and R.K. Melton's "Blood Bound Series!"

“The Heart of Time”

Each time the crystal has appeared, regardless of the world or time, its guardians have always been ready to defend it from all who would use it selfishly. One girl stands in the center of these ancient guardians, the object of their affections, and she holds within her the power of the crystal itself. This is the bearer of the crystal and the source of its power. The lines, however, blur and guarding the crystal slowly changes into guarding the priestess from the other guardians. This is the wine from which the heart of darkness drinks. It is the opportunity to make the guardians of the crystal weak and susceptible to attack. The darkness craves the power of the crystal and also the girl as a man would crave a woman. Hence the entrance into another world where darkness is dominant within the world of light.

“Defy Not The Heart”

A young girl, born over a thousand years into the future, accidentally steps into the mist of a war-stricken land, carrying the one thing with her that can heal or destroy their land, a sacred crystal known as the guardian heart crystal. As five brothers are drawn to her and become her protectors, the battle between good and evil turns to a battle of the hearts.

Now, with the Crystal shattered and the enemy closing in, the last thing they expected was a spell to turn them against each other. As tempers soar and secrets are kept, jealously becomes a dangerous game between the powerful brothers. When possession becomes an obsession can the brothers keep the enemy from claiming the one person they are all trying to protect?

Toya would fight all odds to stay by Kyoko's side. His heart and his daggers are hers to take. He only asks that she accept them. Even when the darkness of their enemy threatens what they have fought so hard for, Toya would die for her honor and her love. In a moment of bliss, he finally gains the courage to open his hidden heart and confess the true emotions he keeps within. That moment is forever changed when Kyoko is taken from his world by the heartless fates above. Believing he is cursed, Toya gives up, falsely accepting that his reason to live has forsaken him. Now, Toya must defend her against the worst enemy of all...himself.

“A Light in the Heart of Darkness”

To Kyoko, mythical creatures are something you rent and watch on a Saturday night with your friends. When a mysterious stalker turns the shadows around her into dark corners with sharp deadly edges, will she be able to hide from the past? Darkness has fallen upon the world again and the guardians have been awaiting the resurrection. Though they are thought to be creatures of myth, in this reality they are far more real than people think. Only when the moon is high will these creatures, these guardians, battle the evil that seeks to overtake the world and the girl who holds ultimate power… the light in the heart of darkness.

Kyoko finds herself in the middle of an ageless war between the powerful Guardians and the ultimate Guardian who has become the enemy… a demon lord who holds the power to destroy them all. Secrets are kept and true hearts are hidden beneath layers of ice and wickedness. Once more the battle between good and evil begins to blur… sending the destinies of those involved into a most dangerous and seductive form of chaos. When the enemy shows his heart and the ally becomes heartless, these powerful immortals battle their own hearts as well as each other to protect the priestess. She is the center of their world and each Guardian seeks to make her what she was meant to be… A Guardian’s Possession.

Kyoko was born to fight demons and thought she knew all the rules until she befriended a half-breed vampire and was accidentally seduced by his master. Realizing that the enemy has a heart, the lines between good and evil become blurred, leaving Kyoko confused and in a world of danger. Now with an obsessed master vampire stalking her every move and his twin brother starting a vampire war, Kyoko is pulled even closer to the one thing she was supposed to destroy.

Some legends describe him as a god, while others say he is a devil that seeks to kill the gods to gain his freedom. They had given him a name… Darious. His plan was to send every demon back into the pit and his weapon was the fury that raged within him. Saving the humans who avoided him like a dangerous plague, Darious was stunned to find emerald green eyes staring up at him without fear. Little did Kyoko know that one smoldering glance could tempt a god and blaze his passion that had only known fury. Surrounded by the guardians that love and protect her, do any of them stand a chance against the black winged angel or the demons that have silently invaded the city? Kyoko finds out that it’s hard to run away from Darious when he’s faster then she is.

The guardian brothers are very possessive immortals when it comes to protecting Kyoko from Hyakuhei, from demons, even from herself. But when does it go too far? If the brothers knew they had to kill each other just to be near her, would they do it? If it would allow them to love her, then they would do it in a heartbeat. Will their death be enough to keep Kyoko from the demon lord, Hyakuhei, who has loved her for all of eternity? Sometimes even blood is not enough when Kyoko doesn't play by the rules of their Cursed Hearts.

Romance Writers Reviews has reviewed “Blood Bond," and "Dark Flames, Books 5 and 6 in the Guardian Heart Crystal Series, written by Amy Blankenship and R.K. Melton. Click on the links below to read the review.